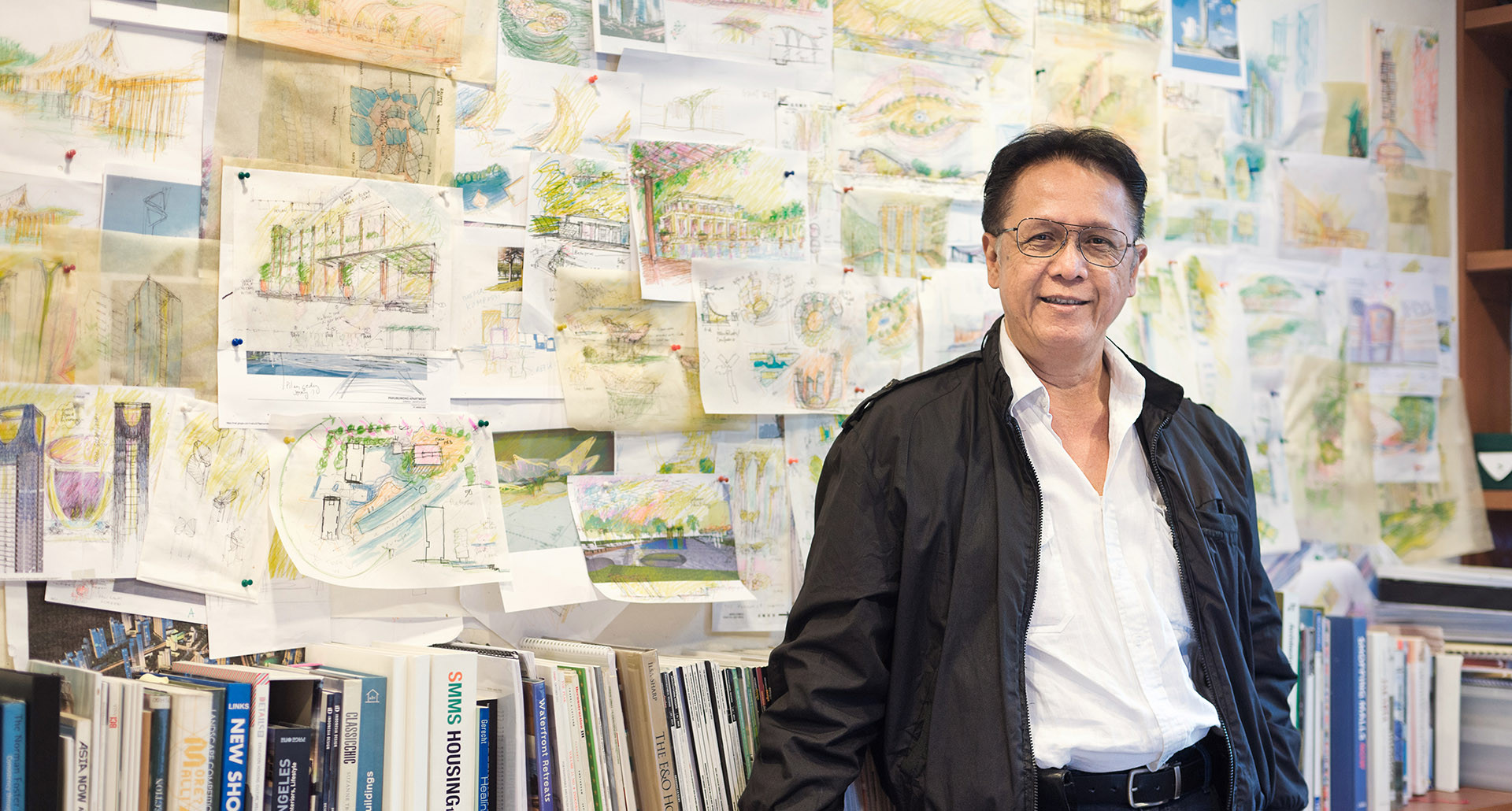 INTERVIEW WITH JUSUF SETIADI - From Architecture to the City

FROM ARCHITECTURE TO THE CITY
Interview with Jusuf Setiadi

“A city is a life. So, it is a breathing space for its inhabitants”. This what Jusuf Setiadi, a senior Indonesian architect said. This short interview describes his point of view and principles, profoundly in poetical and spatial manners. His response to ten questions in the interview can read herewith.

In architecture, a container contains human activity where people meet. It is a place for interaction and information exchange, as well as for developing a wider network. In this context, architecture has a vast dimension and becomes a sort of important agent for change of life.

In small discussion, you said that architecture is like puzzle. What does it mean?

Architecture is like a puzzle, which is a game that requires us to use our ability and wit to complete it. In a puzzle, we need the ability to place those piece logically in order to get the answer of the puzzle. I perceive architecture as a sort of collection of such pieces and fragments of various opportunities and conflicts which need to be comprehensively constructed and logically finished.

Architecture, as a puzzle, is formed by fragments. It is akin to a game that one needs to learn its tricks and tips in order finish it to compose it well. An architectural work could be imagined as a puzzle that requires construction and re-construction to yield the best combination and the best pattern which fits the need of the particular work.

To see the works by Airmas Asri which consist of myriads of architectural works, one would find a difficulty to determine one particular “ism” or style. What do you think about this?

In term of “ism”, we (Airmas Asri) perceive that there are two options worthy of attention. First, that a work should conform with, or participate in, an “ism” and second, to regard an “ism” as a part of rather fashionable commodity.

In such position, Airmas Asri assumes that we can learn from each “ism” without treating it as an ideology to adhere. For us, each of our works is a product of various conditions, such as the programmatic need a client has, the possibility of getting it built, the efficiency in making it done, the profitability (in commercial context), the site and environmental conditions and the existing market condition. Personally, I consider that the principle of “no style” could be helpful to us having various thoughts in creating works of architecture.

Each work represents its time. It is also important to discuss how can, a project contribute to public interest while giving a positive value to its owner.

In your opinion, how should logics be positioned in architecture?

A work of architecture talks not only about intuition, sensation and feeling. It should also involve logic when it comes to completion of the work. Logic is a system required for the usually complex architectural problem that can be solved, structured and accepted to common sense. Though logics is systematic, it should also be elegantly “manipulated” to produce dynamism of each spatial creation that we produce.

For me, a work design involves a logical value that is a design itself should be logical. We try to position our project within features with high degree of certainly. We hope that each of our projects could give logical contribution to the environment, owner, user and observer, while having a degree of certainly to get accepted architecturally.

We tend to think that each project has its own essence. In your opinion, what it the essence of a work of architecture?

To see the essential is important is creating a work of architecture. I think, when we understand the essence of a project, then a design character is attained. An essence is like a thesis upon which a project rest. Airmas Asri tries to question the presence of a project and how it should negotiate with various conditions it encounters. In my assumption, through this act of questioning, we are seeking the uniqueness of the project.

The solution of each project is distinct, depending on the condition it encounters. To learn how to start composing question and seeking the answers in order to build the thesis, is a fundamental consideration for Airmas Asri. Usually, the questions come out of discussion between architects and other involved parties. Questions are let to flow freely before they usually converge into a number of issues. These issues, in turn, would become the basis to build up the projects essence.

In the past paced development of cities (Jakarta in particular), how should the position and role of a work of architecture be?

We have a number of ways to do that. We may treat public interest as a parameter in a design process, provide a place for social interactions, conceive buildings as part of landscape for the city and conceive work of architecture as an identity for the city. There are other more, of course. What matters, though is to try to make the city better and of a higher quality for the sake of the public.

I am aware that, when we talk about architecture and its relation to the city, architecture cannot be separated from political, economic, social-cultural, and environmental conditions of a country or country or a city. Architecture is a direct and indirect result of such conditions, hence quite often, these conditions become the determinant, as well as sources of inspiration for architecture. The condition and pride of a nation are usually reflected on the architecture in its cities.

What is your prediction on the relationship between the city and the building in the future, say in 2050?

A city is a life. So, it is a breathing space for its inhabitants. A city is also a place for its inhabitant’s activities, so each space should be of good quality. A city should also be source of inspiration for its citizens to make life more enjoyable. Talking about a city entails a discussion on how people experience and live the city life.

In the future (say, 2050), I think, people will be more aware of the environment due limitation of energy sources. This will prompt us to live more efficiently. Future buildings should be conceived in consideration of energy-related factors, while synergizing with other factors and creating organic unity. Building blocks will form small cities which will be interconnected in their needs for energy. Cities will try to build systematic and structured complexity. There will be a need for a design intervention with “back to nature” tendency.

What principles may give an added value to work of architecture in relation to its surrounding environs?

I think there are several things to be considered. Things like the ability to reflect contemporariness. That is, our view on the environment always move in space and time with the assumption that each environment always changes and adapts to the conditions as encountered. Then, the ability of a building to be a guidance for its environment. That is, the building we produce should manage to upgrade the socio-cultural value of its locale while providing a good public space for people where they would feel secure and comfortable and have positive emotions.

After producing many architectural works and becoming Indonesia’s largest architecture firm, what is your next target?

Growing in a global city like Jakarta has bestowed us a chance to participate in building a better city for future generations. Global capitalism in the world’s big cities has a big effect on the development of a city. Therefore, we always try to be careful in creating our works which will be of a great present to a city.

Our target is to get better and to give great contribution to architectural development internationally. We are starting to do this. A number of cross-border projects have become parts of our firm. With such rapid development of this firm. With such rapid development of this firm, as well as considering how the world has changed so much, we try to produce architectural works which are really architecture. What I mean by this is that each of our products aims to respond to the global challenge.

Based on your experiences, do you have something to say to future architects in producing their works?

Each works should provide identity for the city and for the architecture itself. To have a “national” identity in the context of locality is important in our architecture. One should always try to really study the connection between the physical (such as local culture), in order to produce a better architecture.

Each generation has its own tendency to create its architecture, but I believe that each work is container or a place where life is seeded a place to yield better life for the development of civilization.